Hajj is known as the pilgrimage to the holy city of Mecca in Saudi Arabia, which every adult Muslim must make at least once in his or her lifetime. The Hajj is the fifth of the Five Pillars of Islam, which are important Muslim traditions and institutions. The pilgrimage rite begins on the 7th of Dhul-Hijjah (the Islamic year’s last month) and ends on the 12th.

All Muslims who are physically and financially capable of doing the hajj are required to do so, but only if their absence will not cause hardship to their families. A person may perform the hajj by proxy, designating a cousin or friend to “stand-in” for them on the trip.

Prophet Muhammed (SAW) set a framework for pilgrimage ceremonies, but deviations have emerged, and the rigid official itinerary is rarely strictly followed by the masses of pilgrims, who regularly visit the numerous Makkah sites out of order.

When the pilgrim reaches about 6 miles (10 kilometers) from Mecca, he or she enters the ihram state of holiness and purity and dons the ihram garments, which are two white seamless sheets wrapped around the body for males and sewed clothing for women. Until the pilgrimage rite is completed, the pilgrims do not trim their hair or nails. They enter Mecca and walk seven times in the Great Mosque around the sacred shrine known as the Kaaba, kiss or touch the Black Stone (Hajar al-Aswad) in the Kaaba, pray twice in the direction of the Maqam Ibrahim and the Kaaba, and run seven times between the minor prominences of Mount Safa and Mount Marwah.

The pilgrims are reminded of their obligations on the seventh day of Dhul-hijjah. The pilgrim travels the holy places outside of Mecca—Jabal al-Ramah, Muzdalifah, and Mina—and kills an animal in remembrance of Prophet Ibrahim’s sacrifice in the second stage of the rite, which takes place between the 8th and 12th days of the month. Male pilgrims have their heads shaved, while female pilgrims have a lock of hair removed. The pilgrim returns to Mecca to do the farewell tawaf, or circumambulation, of the Kaaba before departing the city, after performing the Rajm ritual at Mina, in which pilgrims throw seven stones at three walls (previously pillars, signifying the Devil) on three consecutive days.

The pilgrimage to Mecca and the norms controlling its ceremonies differ according to where the pilgrim lives, whether he or she plans to conduct umrah alongside Hajj, and whether or not an animal sacrifice is desired. These differences have traditionally been divided into three categories and referred to as the three varieties of Hajj: Hajj Ifrad, Hajj Qiran, and Hajj Tamattu’. Any of these three options will fulfill the obligatory Islamic requirement of Hajj once in a lifetime if performed according to their rules and without doing anything to invalidate them. 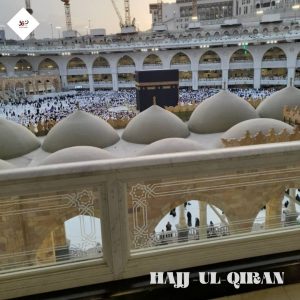 Qiran : This type of Hajj is also known as the accompanied Hajj in Islam. Hajj Qiran is a concession by Allah toward those who do not reside near the scared months. In Hajj Qiran pilgrims has the intentions to enter the state of Ihram for both Hajj and ‘Umrah at the same time, or entering Ihram for ‘Umrah first and then combining the intention to undertake Hajj into the intention for ‘Umrah before starting the ceremonies of ‘Umrah. The pilgrim then performs the Hajj ceremonies, fulfilling both the Hajj and ‘Umrah obligations.

A pilgrim can wear the Ihram for both Umrah and Hajj, or she can wear the Ihram for Umrah first, then make Hajj intentions before the Tawaf for Hajj. Note Umrah shall be done before Hajj started. In Hajj Qiran pilgrim the state of Ihram until his/her Umrah and Hajj are done, even if there is a long period between them, the state of Ihram cannot be existed. 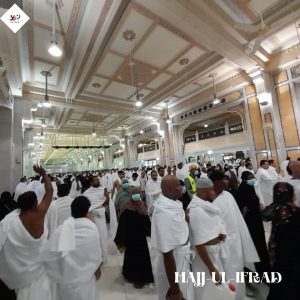 Ifrad:Ifrad is also known as isolated Hajj, it is not accompanied by Umrah, the one who performed isolated hajj is known as Mufrid, it usually performed by people who reside within the boundaries (e.g) Jeddah. During Hajj Ifrad one has to wear the Ihram for Hajj only with the aim of performing Hajj only. A pilgrim performing this type of hajj cannot perform Umrah however if he does perform Umrah during the Islamic months such as Shawwal, Dhal-Qadah and Dhal-Hijjah, is longer performing Hajj Ifrad.

If he/she performs Umurah in these three months, now it is due for he /she to perform one of the two other types of Hajjs.

Only the Hajj pilgrim wears ihram. They do tawaf for their arrival and sa’i for Hajj when they arrive in Mecca. Because they do not withdraw from the ihram, they do not shave or cut their hair. Instead, they remain in ihram until Eid day, when they stone Jamrat Al-‘Aqabah. A Mufrad can offer a sacrifice of animal but is not compulsory. 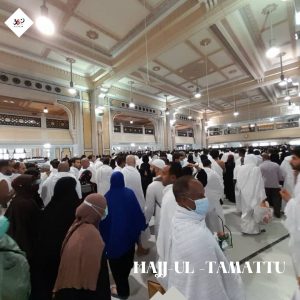 Tamattu’: Tamattu’ it’s a type of hajj in Islam that is accompanied by Umrah. Tamattu refers to performing ‘umrah first and then entering ihram for hajj. People who perform Tawaf al Qadom are usually performing Hajj Tamattu. Pilgrim who performed this typed is called mutamatti because a pilgrim on Hajj Tamattu’ because a pilgrim that is not in state of Ihram his allowed to do things that are haram for people wearing Ihram.

A pilgrim wears Ihram for umrah only during the months of Hajj, which means they make Tawaf and Sa’i for ‘Umrah when they arrive in Mecca. They shave or trim their hair after that. They put on the Ihram again on Tarwiyah, the eighth of Dhul-Hijjah, but this time exclusively for Hajj and to fulfill all of its requirements.

A pilgrim performing Hajj Ifrad is not required to slaughter, although he may if he so desires. However, a pilgrim performing Hajj Qiran or Tamattu’ must slaughter, and the reason for this is that he did not enter ihram for hajj from the Miqat site for his people. However, Allah (SWT) has stated in the Holy Quran that if a pilgrim cannot sacrifice an Animal, he/she will fast for ten (10) days including three (3) days of hajj. He/she can fast the remaining ones when he returns to his house.

Tamattu is the most successful of the three types. It is the posture that the Prophet (SAW) urged his people to take. Even after doing Tawaf and Sa’i, a pilgrim may modify his or her intents to Tamattu’.

When the Prophet (SAW) conducted Tawaf and Sa’i with his companions at the Farewell Hajj, he ordered all those who hadn’t brought sacrificial animals to convert their intentions for Hajj to Umrah, cut their hair, and disengage from the Ihram till Hajj.

“I would have done what I’ve ordered you to do even if I hadn’t brought the sacrificial animal,” he added.

Pilgrims should use whichever method is the most convenient for them.