Camel( الإبل) is one of the animals mentioned in the Holy Quran, it emphasizes the significance of their existence. They are beneficial to humans in terms of transportation and consumption.

Camel(genus Camelus) are of three species, any of three species of huge ruminating hoofed animals are native to dry Africa and Asia. They are known for their ability to go for long periods without drinking. They are referred to as “ships of the desert,” which have long been valued as pack or saddle animals, and they are also exploited for milk, meat, wool, and hides. 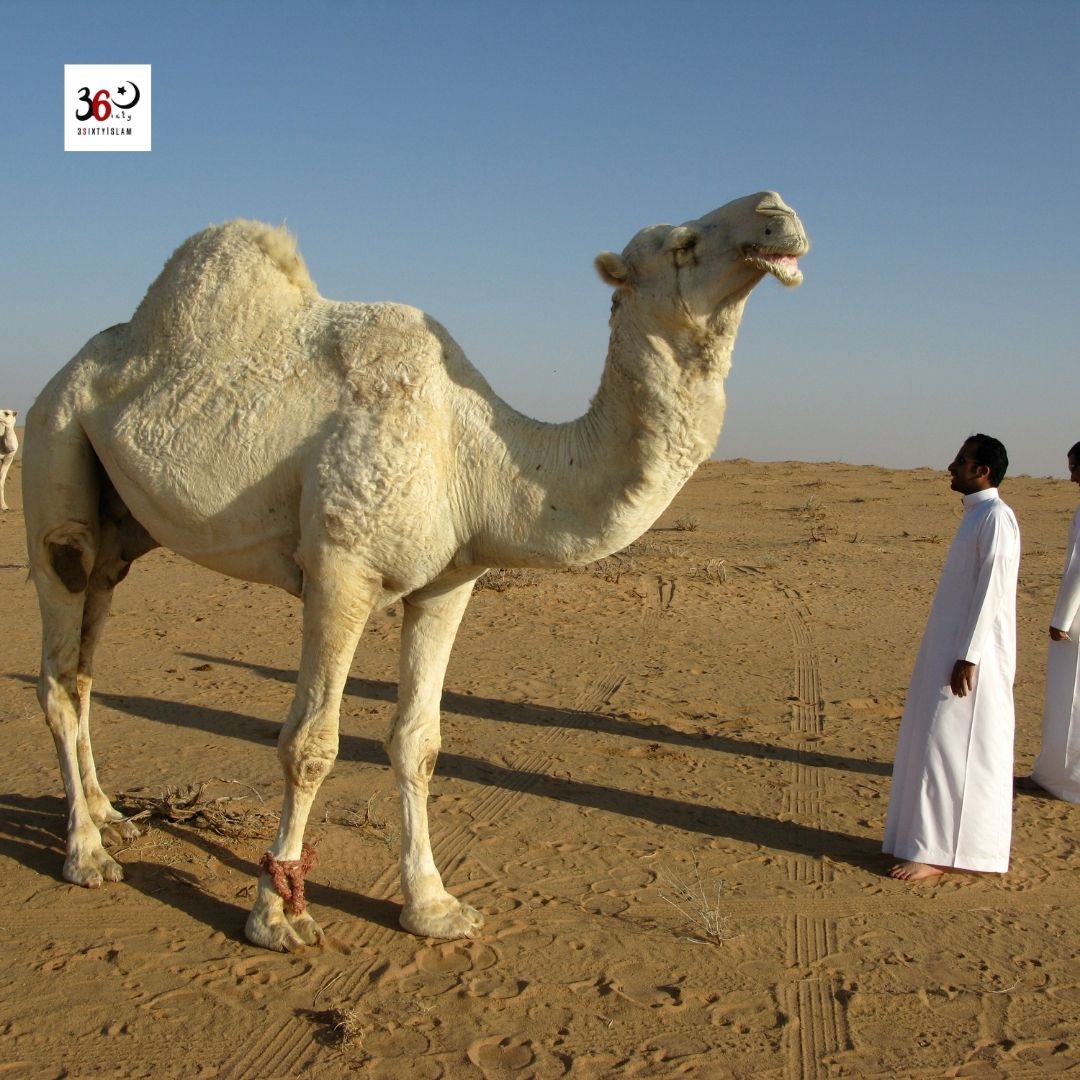 The dromedary was domesticated in Arabia in 3000–2000 BCE, and the Bactrian camel by 4000 BCE in Central Asia’s steppes. 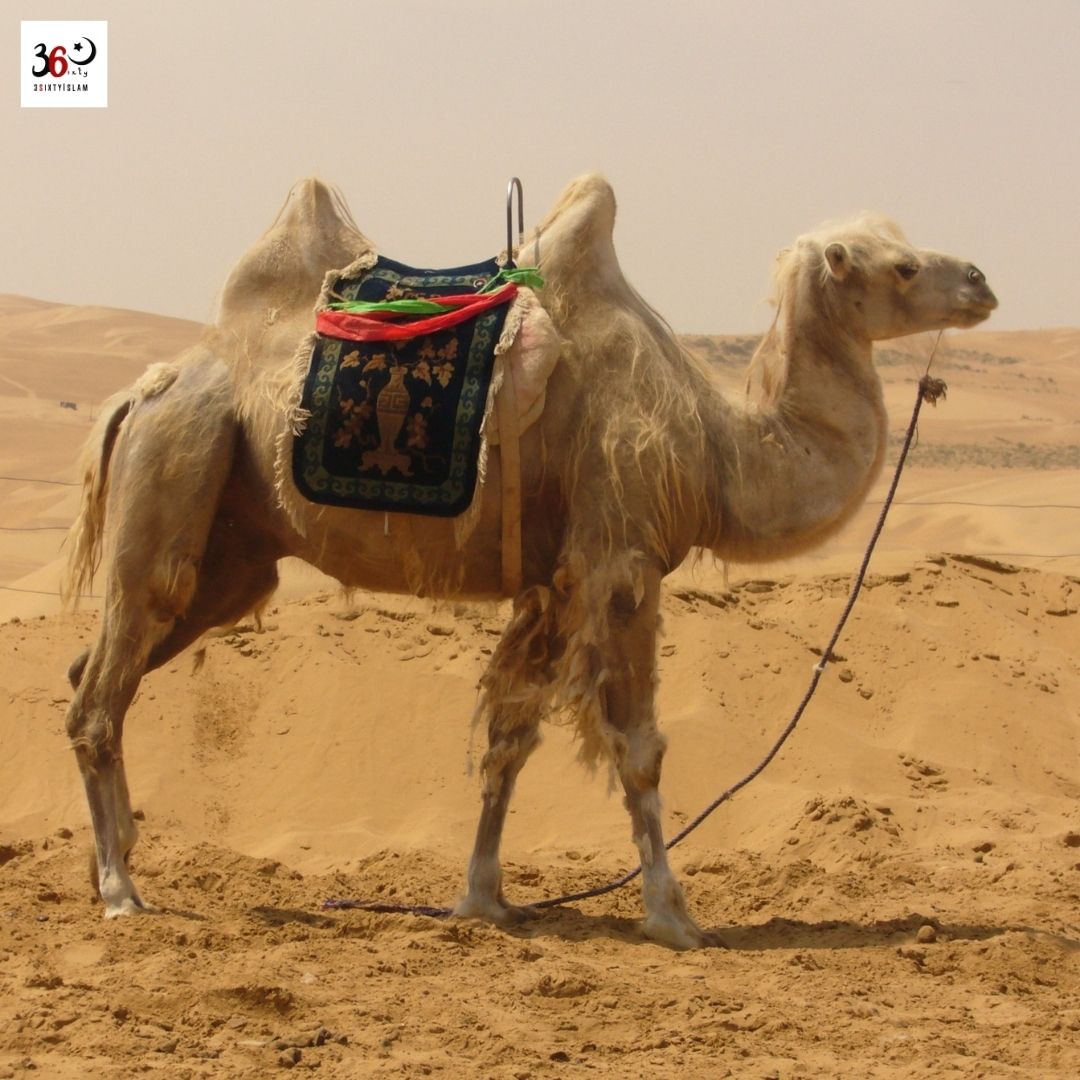 Camels are easily identified by their humped back, short tail, long slim legs, and a long neck that dips downward and rises to a small narrow head. The upper lip is divided into two portions, each of which moves independently of the other. At the hump, all three species are around 3 metres long (10 feet) and 2 metres tall (6.6 feet) (itself 20 cm [8 inches]). Females are roughly 10% smaller than males, who weigh 400 to 650 kg (900 to 1,400 pounds). The colour is typically light brown, but it can also be greyish. Wild Bactrian camels are darker, stockier, and woollier than domesticated Bactrian camels. The nostrils can be pinched shut, and the eyes are protected from blowing sand by thick eyelashes. When the dromedary sleeps down, it has horny pads on its chest and knees to protect it from the scorching desert sand, but the Bactrian camel lacks similar callosities. Camels are normally gentle, but if they get angered, they will bite or kick. Camels huff so loudly when excited that spit is accidentally released.

Camels do not use their hooves to walk. The animal’s weight is distributed between two large toes on each leg, which spread apart to keep the animal from sinking into the sand. Dromedaries walk on the sand with a soft, wide-spreading pad; Bactrian camels have a harder foot. The camel’s foot, like that of the giraffe, is a pace, with both legs on one side moving together. Camels can reach speeds of 65 kilometres per hour (40 miles per hour) in short spurts, but they are also great strugglers. Bactrian camels can carry more than 200 kg (440 pounds) for 50 kilometres (31 miles) in a single day, whereas lighter-built dromedaries can carry up to 100 kg (220 pounds) for 60 kilometres (37 miles) if working at night. 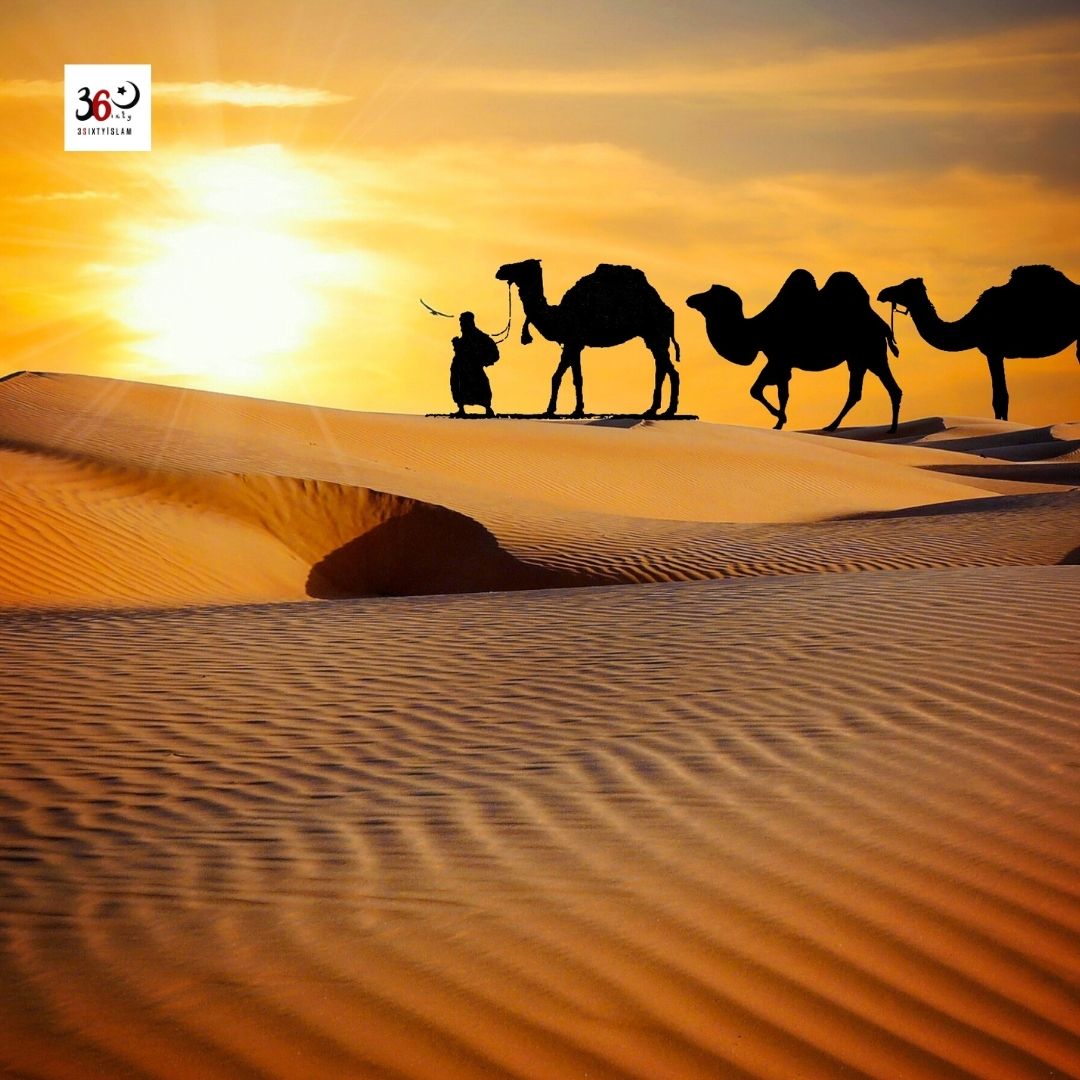 Camel may last four to seven days without drinking in extreme heat, but it can go ten months without drinking at all if it is not working and the forage is moist enough. Even saline water is accepted, and it forages far from the oasis to obtain food unavailable to other livestock in between drinks. After a long drink, the body rehydrates quickly, absorbing over 100 litres (25 gallons) in 5–10 minutes.

The membranes of camel erythrocytes are viscous (sticky and flow-resistant), allowing them to swell. A thirsty camel’s urine flow can be reduced to one-fifth of its normal volume, resulting in faeces that are dry enough for herders to use as firewood.

Camel can withstand intense dehydration and lose up to 25%–30% of its body weight, which is twice the amount that would kill other mammals.

Camels have also adapted to desert circumstances by surviving protein deficit and eating thorns, dry leaves, and saltbush, which other animals avoid. Camels “overeat” when food is plentiful, accumulating fat in one area of the back and developing a hump. The hump sags to the side or disappears as the fat is drained. Fat storage Storing fat in one location improves the body’s ability to distribute heat throughout the body. 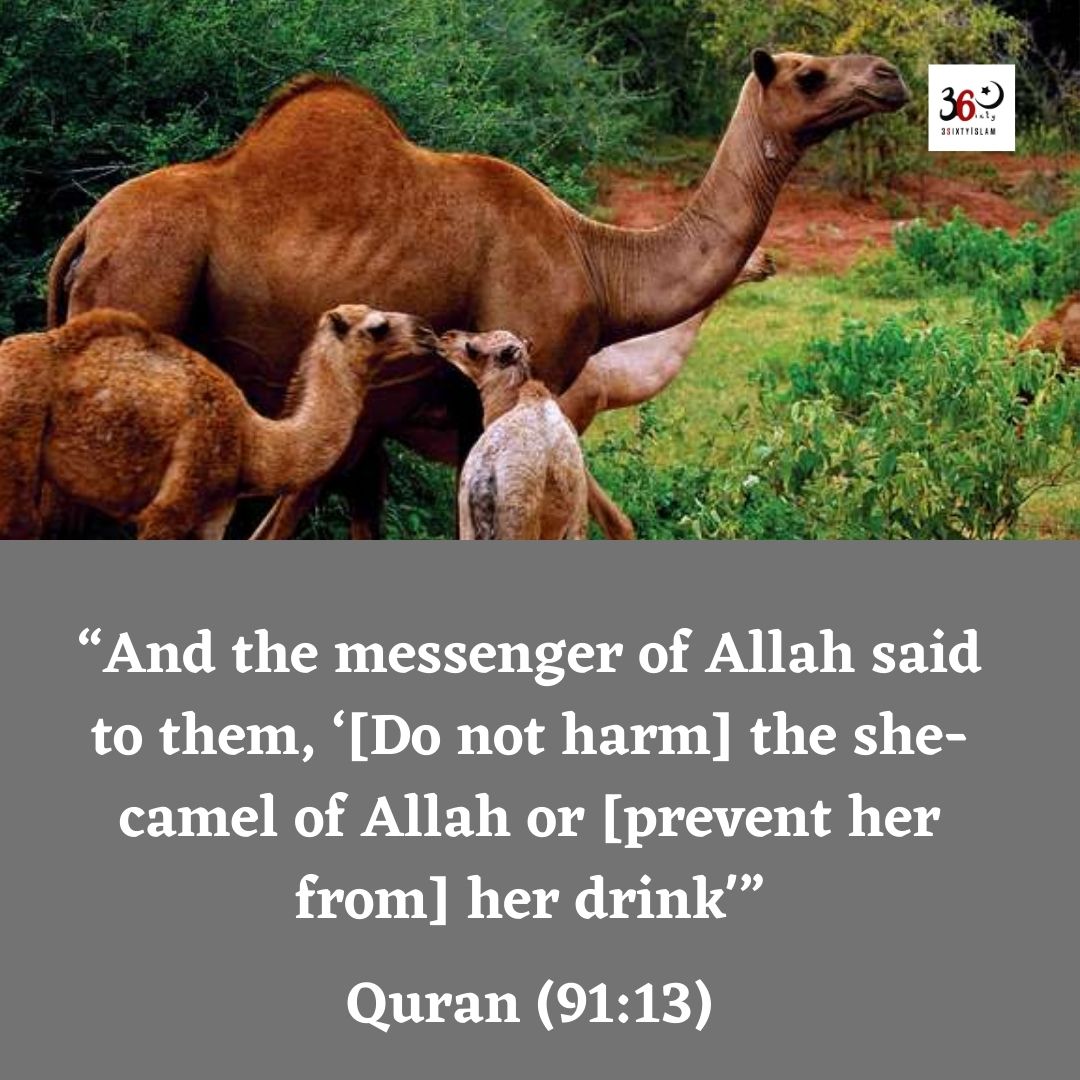 “And nothing stops Us from sending the Ayat (proofs, evidence, signs) but that the people of old denied them. And We sent the she-camel to Thamud as a clear sign, but they did her wrong. And We sent not the signs except to warn, and to make them afraid (of destruction)” (17:59)

“Verily, those who belie Our Ayat (proofs, evidence, verses, lessons, signs, revelations, etc.) and treat them with arrogance, for them the gates of heaven will not be opened, and they will not enter Paradise until the camel goes through the eye of the needle (which is impossible). Thus, do We recompense the Mujrimun (criminals, polytheists, sinners, etc.)” (7:40)

camel milk may be beneficial to people with autism, Type 1 diabetes, food allergies, hepatitis B, and other autoimmune diseases because it increases the body’s production of antioxidant enzymes, which reduces oxidative stress. Daily consumption of camel milk can improve glycemic control while also lowering the insulin requirement of people with Type 1 diabetes.

Although mechanical ways of transportation have overtaken, the camel for most activities, it remains an essential part of some rural economies today. Camels are still bred for their meat, milk, and hair.

THE HEALTH BENEFITS OF THE FIGS FRUIT IN ISLAM

IBADAH: THE ACT OF WORSHIP IN ISLAM

BENEFITS OF EATING DATES IN ISLAM

SALAH IN MASJIDS (MOSQUES) WITH GRAVES: WHAT IS THE RULING?