London Police has arrested a young white male who attacked a worshipper this afternoon at the Regents Park Mosque located in central London as the worshipper was offering afternoon prayers, London police confirmed.

Police officers reached the mosque at 3:10 pm to find the worshipper in his 70s who sustained the stab injuries. He had been taken to the hospital where he is being treated for his critical injuries.

The injured man had been leading the Zuhr prayer as he is the imam of the mosque. London police have also arrested a man on suspicion of attempted murder of the imam of the Regents Park mosque. 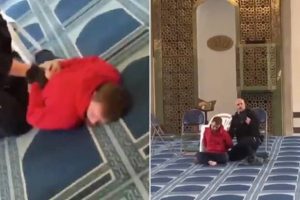 The video footage of the incident showed a young white man is being tackled down by the London police inside the mosque. In a separate video, it can be seen, a sharp weapon about 10cm in length on the floor.

This incident happened just after a day when a gunman in Hanau, western Germany killed at least nine people.

VIRTUES AND RULES OF ANIMAL SACRIFICING IN “EID-UL-ADHA”