Etiquettes and Special Deeds for The Day of Jummah (Friday)

Like the contemporary Gregorian calendar system, the Islamic week also comprises of seven days. Although for a Muslim all the days are same as in all the days he or she has live the life according to the instructions of Allah(swt). However, there is the day of Friday that holds a very special importance in the Islamic days.

The day of Friday is known for the Friday prayer which is in congregation and one of the most performed prayer in addition to the regular prayers. On Friday, the congregational prayer takes the place of Zuhr prayer and a Muslim is to only offer the Jummah prayer.

With regards to the day of Jummah, Prophet Muhammad (PBUH) said in a hadith:

“The best day on which the sun has risen is Friday. On that day Adam was created, he was admitted to Jannah, and he was expelled therefrom.” (Muslim)

Thus, the day of Jummah that comes every week is a day of Eid and a Muslim is to take this day as a day of celebration and be grateful to Allah for all the blessings He has provided as He provided to Adam and Eve by giving them birth on this day and then sending them to Heavens. At the same time a Muslim must also seek forgiveness on this day as well, so that he or she does not face the anger of Allah the way Adam and Eve did on Friday.

Friday Importance and Etiquettes “O ye who believe! When the call is proclaimed to prayer on Friday (the Day of Assembly), hasten earnestly to the Remembrance of Allah, and leave off business (and trade): That is best for you if you only knew!” (62:9)

From this ayah of Quran the instructions are clear and that is when a Muslim hears the Adhan for Jummah prayer he should close all the trade that he is doing and stop any personal business and turn towards remembrance of Allah that is the Jummah prayer. Allah Almighty says that it is the best for a person if he has understanding of it. Therefore, one must try to understand that Jummah prayer is different from Zuhr prayer and a Muslim should make special preparation for the jummah prayer.

Further to the preparation that one needs to make for Jummah prayer, there are certain special considerations in this regard. The following lines discuss the different special preparations that a Muslim has to make for the day of Jummah. 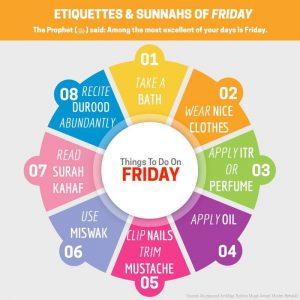 As the day of Jummah is a special day, therefore, like any other special occasion it requires special preparations in terms of purification of the body. Prophet Muhammad (PBUH) said in a hadith:

“Anyone of you attending the Friday (prayers) should take a bath.” (Bukhari)

From the hadith it is obvious that Prophet Muhammad (PBUH) recommended taking a bath for all those who intend to offer Jummah prayer. Although one can go on by offering Jummah prayer without bath, however, Prophet (PBUH) used the word ‘should’ which means commendation. Therefore, compared to ordinary days, on Jummah a Muslim must make sure that he or she takes bath specially for offering Jummah prayer.

In addition to the regular bath, a Muslim must also consider other methods of cleanliness and good hygiene. In another hadith, Prophet Muhammad (PBUH) said:

“O Muslims! Allah Taala has made this day (Friday) a day of ‘Eid’. So have a bath on this day, whoever has perfume should apply it, and use the miswaak.” (Ibn Maajah)

Therefore, in addition to bathing, a person must also try to do miswak and apply perfume with the intention of special preparations for the day of Friday.

Prophet Muhammad (PBUH) said in another hadith of His:

“Whoever reads Surah Kahf on Fridays, there will be a bright light to shine for him between the two Fridays.” (Nasai)

This hadith shows the encouragement of reciting Surah Kahf on the day of Friday. This Surah tells the story of the companions of the Kahf (cave). These righteous companions out of the threat of their lives took protection in a cave where they fell asleep and slept for hundreds of years, till they woke up and saw the place from where they ran, all the people had turned into believers. The recitation of this Surah helps a Muslim seek refuge of Allah and affirms their faith on the support and assistance He provides.

Although every Muslim should supplicate whenever he or she finds chance any day of the week, however, special days like Friday call for special or excessive need of supplication. Prophet Muhammad (PBUH) said in a hadith:

“There is no day more virtuous than Friday. There is such an hour in this day that no Muslim will make dua in it except that his dua will be accepted. And he does not seek protection from anything except that Allah will grant him protection.” (Tirmidhi)

This hadith shows that on Friday there is an hour in which if a Muslim supplicates for something it will be accepted and if he or she supplicates for seeking protection of Allah, they will be given protection. The point to ponder in this hadith is that there is an ‘hour’ in Friday, and nobody knows which hour it will be. Therefore, a Muslim should supplicate throughout the day of Friday.

Khutba is the prime feature of the Jummah prayer. There are two sermons or Khutba on Friday in which the Imaam delivers a speech. With regards to the Khutba of Friday, Prophet Muhammad (PBUH) said:

“If anyone performs Wudu properly, then comes to the Friday prayer, listens to the Khutba attentively and keeps silent, his (minor) sins between the Friday and the following Friday will be forgiven, with the addition of three more days; but he who touches pebbles has caused an interruption.” (Muslim)

From this hadith it is obvious that on the day of Friday, going to the mosque and listening to the Khutba attentively results in expiation from sins. The sins from one Friday to the other are forgiven in addition to three more days. Thus, a Muslim must make sure that he goes to the Friday prayer with ablution, listen to the Khutba attentively and not make any mistake or disturbance during the Khutba as well as the prayer to ensure expiation of sins.

In a nutshell, Friday is one of the blessed days in the Islamic calendar and the most blessed day of the week. This day is known for the Khutba and the congregational prayer along with the history it has in the religion. Therefore, in order to observe this day in the rightful manner, a Muslim must make sure that he or she makes special preparations that make this day stand apart from the rest of the days of the week.

Hadith of the Day

THE PROPHETIC ETIQUETTE OF SLAUGHTERING ANIMALS